Immanuel Houston has been working closely with the Houston Heights Association to create a new use for it’s old sanctuary building at the corner of  Fifteenth and Cortlandt Streets. We are asking both our congregation and the public to work together on raising the funds to rebuild this beautiful and historic building into a community center.

The existing structure had fallen in such dis-repair that Immanuel had considered tearing down the building. The Houston Heights Association stepped in and Immanuel and Houston Heights both agreed that it could be put to a great use as a new space supporting both the church and the community. 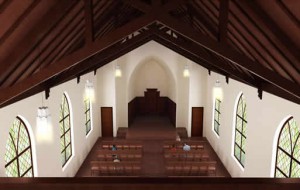 The community will greatly benefit by this new space as it will be offered for many non-church uses. The church will oversee the building and will continue to maintain it.

The new space will not have any fixed seating so it can be utilized as a multi purpose room. Some of the uses envisioned are:

The new space will also feature multimedia equipment with an a/v booth in the balcony.

The basement will be built out as a new student center. This space would feature a cafe area and space for students to gather and feel safe and comfortable.

The entire building would feature an added second stairwell and an elevator.